Searching for the Lacanian Real within the frames of Hiroshi Sugimoto’s Seascapes (1980-2002) is as quixotic as the transubstantiation of the same through language. In his photographs nothing deviates from the studium. Stark in appearance and deceptively simple in composition, they are exercises in technical prowess, systematic restraint, and meticulous planning. However, to say that I experience his images with an average affect from an acquired training is untruthful. There is, undoubtedly, a pierce—a puncture—that occurs in my encounter with the photographs that invades bodies and blurs delineations. It is within this disorienting wound that I locate the contingency of the Real. Here, if present, the Lacanian Real is not the visible signifier in Seascapes, but rather, the entropic movement within the interstitial struggle between bodies—that of the viewer and the art object and of the photograph and its referent.

Begun in 1980 and completed in 2002, Seascapes include a series of black and white prints of different bodies of water. Captured in the same compositional arrangement: horizon line suturing surface into water and air, they differ in quality of light and atmospheric condition—no photograph being a copy of another. Taken with a large format camera (8 x 10 film) and produced through hours of exposure time; these pictures, excessively bathed in light, cause the referent to be, not instantly captured, but burned onto the negative. Although titles like Baltic Sea, Rugen, 1996  and Lake Superior, Cascade River, 1995  betray geographical location and time of production; the nearly abstract and vacuous compositions remove the prints from spatiotemporal specificity and into an aporia that struggles to liberate itself from the photographic frame. Thus, rather than referential, these prints appear as embodied existence—at once erased and retraced—and render visible the tensions between the Real and the Symbolic within the photographic image.

The black and white gradations within Sugimoto’s Seascapes color the tension within the Lacanian triad. Different from painting, where color is affect, in photography, color is verism: an indexical translation of the world-out-there. These prints—ranging from cream white to charcoal grays—albeit facsimiles of objects in the world; because it lacks a key visual signifier—correspondence of color between sea and image-sea—retrace the referent within a subject-object perceptual gaze and thus transforms the world into a reflection of subjectivity. No longer is the world objectively translated; rather, much like language, the same is articulated into a double bind so to constitute the viewing subject’s subjectivization and world-view.

Color, incommensurable through language, is the liminal threshold of alterity. Experienced as both attached to and detached from a referent, embedded in and cut off from experience, color is a pulsating, moving body rather than a world to be pictured. What results from its removal in Seascapes is a hallucinatory entry of the referent into Law: the realm where the “I” speaks, reasons, and understands. Sugimoto´s photographs are inextricably wrought in the Symbolic and enunciate a common speaking thread: all images are 119.4 x 149.2 cm, taken with the same large format camera and black and white film type, suffer equal exposure time, are captured in the same composition and configuration, and exhibited at the same eye-level. However, what differentiates one print from the other is that which overflows as more-than-speech: the phenomena of the Real. Although color is denied, it is precisely the irreducibility of phenomena—of which color-as-non-color pulsates within and without—that interrupts signification.

Black and white, instead of fixing itself upon an object, resists as color´s doppelganger. It is precisely the striation of grays which cuts the frame and sutures amputated limbs as sea and sky.

Erasure and presence are punctuated by the two separate movements that occur in the perceiving of Seascapes—the motion towards/away from a singular frame and the horizontal trajectory that reads a print in relation to the whole. In relating his first encounter with the sea, the artist remarks: “The sea flickered far below like frames of a motion picture. I felt I was gazing on a primordial landscape—perhaps it is strange that a child should have prolife memories, much less words to express them.” Similar to his recollection of flickering uncertainty, the frames that comprise Seascapes, illustrate the struggle for the objet a—that which has been lost in the constitution of the Subject.

Images like North Pacific Ocean, Ohkurosaki, 2002 and Caribbean Sea, Jamaica, 1980, have a rigid horizontal axis that form two non-corporeal, but contained, bodies: air— light and smooth, receding into the background— and water—dark and striated, advancing into the foreground. Bodies however, blur once the frames are viewed in relation to the other hundreds of photographs that depict, in varying degrees, the weightlessness of demarcations and erasure of tonal difference. The sea— fixed within a frame only to have it dissolved in the next. The erasure and retrace of appearance destabilizes the referent and brings forth the desire of breaking the boundaries of the framed body. This struggle, between boundless experience and structured representation, parallels our fruitless attempts of employing language in the arresting of the Real. 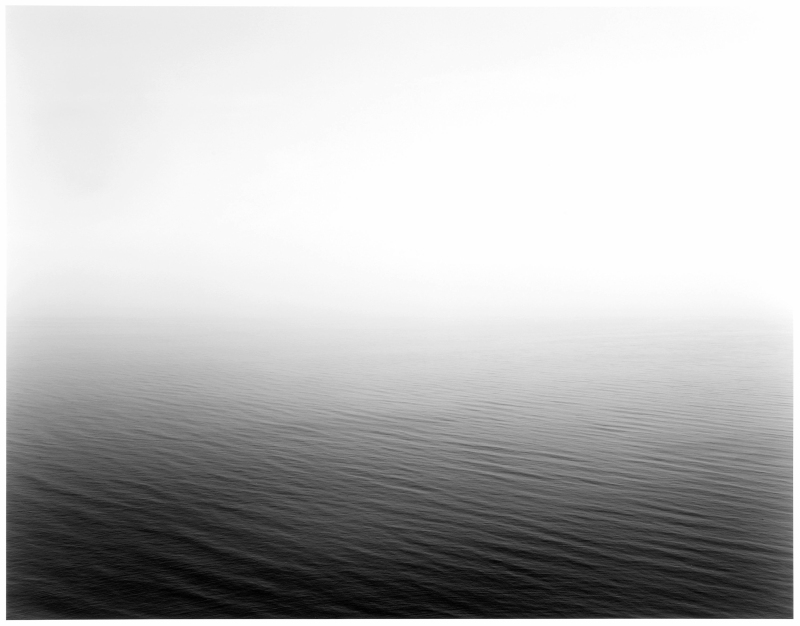 The other motion—that towards and away from a singular frame— further punctuates this tension between disembodied phenomena and its imprisonment in form. Three instances of visual recognition occur through this unscripted ritual of focusing in upon a work of art: art abstraction, documentary representation, and a pre-linguistic abstract. Although the first two pertain to the studium, the last is strongly within the domain of the punctum. From afar, the stark compositional arrangement—monochromatic rectangle with horizontal schism—resembles minimalist monochromatic studies or photographs of abstract works reminiscent of Mark Rothko or Barnett Newman. As one approaches the frame, title and visual details assume legibility. Motivating a shift from abstract to documentary representation, geometrical shapes morph into objects existing in the world—the sea, the sky. With the addition of denotative titles, the identity of the print is firmly tied to a specific geographical body of water at a specific time. In this level of visual recognition, the image is at its most articulate and indexical. Embodying Barthes’ that-has-been, the photograph unmistakably points to a certain space in time.

However, as one continues to move forward, reality, once again, blurs into non-specificity. Different from minimalism, this abstraction is not structured within the framework of language. Rather, being pre-linguistic, it goes beyond the studium and embodies the struggle between the incommensurability of the world and our desire to tame it through language. This pre-linguistic encounter—located at the resistance to and imprisonment in signification— is the punctum.

The punctum thus, only exists in the struggle between bodies. Far from being the biophysical substrate of an individual, the body—in this investigation—is the symbolic boundary that structures or attributes form to phenomena; an appalling corporeal consequence of the entry into language. Familiarity of form at the expense of the loss of alterity; bodies are that which separates us from the world in order to make the latter legible.

Body-as-boundary turns interesting when one considers Sugimoto’s remarks regarding Seascapes. As the artists comments “the sea has to do with the idea of ancient man, facing the sea and giving a name to it. Naming things has something to do with human awareness, from the separation of the entire world from you…I was thinking about the most ancient human impressions.” Seascapes through its simultaneous containment and denial of form, is located within the undecidability of the ancient human as he struggles to give bodies to that which cannot be contained. By placing considerable strain upon the subject, Sugimoto de-familiarizes the photographic referent and causes the studium to encircle but never stabilize neither the image nor the spectator. Becoming-body and becoming-sea, these prints float in aporia and welcomes the viewer to partake in the experience. It is through this process of becoming that language loses domain, enabling Seascapes to encounter us on equal terms.

Defined by Barthes as “that which rises from the scene, shoots out of it like an arrow, and pierces me,” the punctum is, essentially, the perforation of the boundaries of the body. By engulfing our field of vision, we too become the first ancient man surrounded by the vastness of phenomena, attempting to arrest it through the language of a lens. As Jacques Ranciere remarks “the punctum, conceived as its affective force, irreducible to transmission of knowledge. This affective force is the transfer of an absolute singularity, that of the represented subject, to another absolute singularity, that of the viewing subject,” the punctum is the sacrifice of the known in order to receive the affective force of that which precedes language. It is precisely this undecidability inherent in Sugimoto’s Seascapes— the double movement of becoming-body and becoming-sea— that pierces my body and dissolves its borders.